This thought came to my mind, when I was waiting for my friend to come and pick me up from a bus stand to the exam center.  This bus stand was one of the most indispensable as it is situated in the heart of this capital city. Almost all the major routes pass from that stand; still the condition of that bus station was so pathetic. I was wondering as who is to blame. Should I blame myself for not doing something about it, general public who litter everywhere or the politician who are ruling the country and have munched up all the funds which were supposed to be allocated for infrastructure and welfare?

This is not the story of just one bus stand. This is the story of every nook and corner of this country except few VIP areas where politicians and rich businessmen reside.  In VIP areas of this country, you will find more security personnel and sweepers than the actual number of people residing there but they are rarely seen in the most densely populated areas where they are needed most. When a politician is chosen as an MLA or MP, his fortune rises from few thousands to millions in just a year or two years.  Don’t we know from where all this wealth is coming from? We all know still we are letting this to happen. Why are we so helpless and numb to this problem? Even if we thorough him out and elect a new one what is the guarantee that he is not going to be the same as previous one. The real question is what can we do? From where can we find our ideal politician?

“Ideal Politician”? that would have clicked in your mind and you would be wondering what would he look like? what would he be? He will be our saviour.  He will not hide behind the walls of posh colonies. He will be living among us where majority of the population lives. He is not going to tour the flood affected areas by his helicopter instead of that he will visit that area and talk to the affected by physically present there. He will not ride in his luxurious cars around the city causing traffic jams for the common people, instead of this he will visit those places like that bus stand and will notice the short-comings and will be determined to remove those. He is not going to look like a businessman dressed in suits or an obese man with his large tummy like a pregnant lady. He is going to look like as a common man who has been selected by common people to work for them.

An ideal politician would not be dressed like out of crowd dressing like each and every politician in our country dresses. I don’t know what they want to prove by dressing this way. Our present day politician’s lifestyle is not like the lifestyle of 90% of the population, instead of that they are living a lifestyle which only 10% population is capable of living. Then how come we expect those politicians to understand our problems. That day my problem was the pathetic situation of that bus stand, a person who has never been there is never going to understand that problem.

According to me the only politician who is closest to be called as an 'IDEAL' is Arvind Kejriwal, other are not even in this race. He is the one who is there for common man. This is evident from the protest against gang rape in Delhi or other protests related to electricity bills and corruption. He is the one who raised the problems not like the politician but like a common man. ‘Aam Aadmi Party’ is the name of his party and he totally justifies the name. Mind it, I am not a member of that party nor I am directly getting benefited from writing in support of him. But yes, I will be benefited as a citizen of a country improving and developing in real terms if he comes to power. 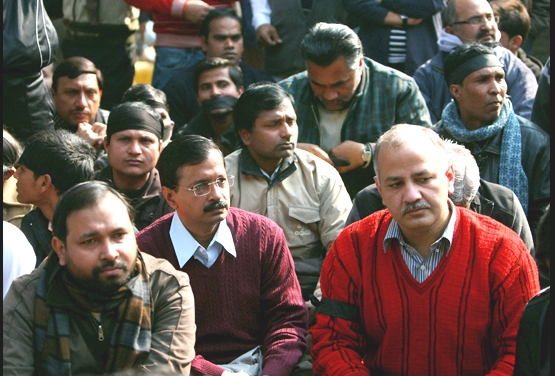 One more thing which makes him ideal politician is his fearlessness. A person without any opposition or any of the political party’s support stood against the government. A government which never did anything against Ravi Balkrishna (Baba Ramdev’s aide) in fake passport case until he turned against government with Baba Ramdev. This government who can dig your past as long as 20 years back, it’s impossible for us to raise our voice against government. It is because the functioning of the government departments in India have forced us do some illegal things like bribing them to get a LPG connection or make our driving license.  At least one person from our family would have bribed or would have done something wrong which can come from the past and haunt us.

An officer in Income Tax department and a leading member of several NGOs would have a huge property but he doesn't have and I don’t think if he comes to power his wealth is going to increase that much as increases in the case of other MLAs.  These rare traits are found in him which makes him best choice as an Ideal Politician. He is the one who can lead this country for a better tomorrow.
Posted by Unknown at 6:38 PM

Email ThisBlogThis!Share to TwitterShare to FacebookShare to Pinterest
Labels: Personalities