Make the right choice this time 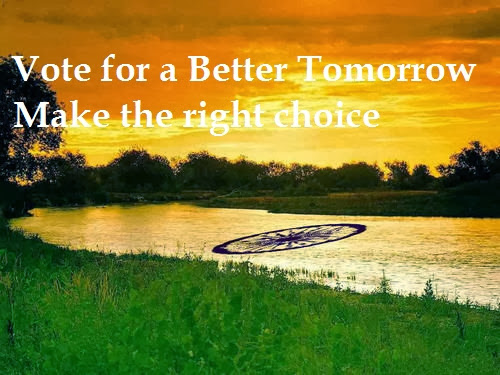 It’s the awakening which happened to me last night, the same awakening which happened to Arvind Kejriwal when he decided to form his own political party. The decision was right as it’s difficult to change the system without being in the system and when it’s the political system of India it doesn't remain difficult, it becomes impossible to change without being in it. I didn’t join his party thinking that my opinion about him in my posts would look selfish. Now I don’t care anymore if I look selfish because I am, I have my selfish reasons, the same reasons which will benefit every citizen of this country, not just politicians and their relatives.

Finally, I took the membership of AAM AADMI PARTY, which just cost me ten rupees and gave me a lot of satisfaction. I can’t describe my feeling  which the thank you letter from the party gave me, which read

On behalf of all of us at Aam Aadmi Party (AAP), We welcome you in this political movement as a member of AAP. We appreciate and acknowledge the first step you have taken towards the efforts for building a Nation which confirms to what we call “SWARAJ”.“Such support motivates us to continue to work hard for something and something that helps make a difference”. One small step of yours would ultimately mean a Giant leap for our Nation.  We hope that you will continue to partner with us in our commitment to make this Nation proud once again.  Thank you for being an important member of our political movement. Best Regards,AAP”

Ha Ha Ha  J  … I am sorry if it seems unimportant for a post. I couldn’t resist myself showing you the appreciation letter though it’s not imperative here.
I have seen people making fuss about the Prashant Bhushan’s statement about Kashmir or any other petty thing for that matter but one thing is for sure we really don’t have any better choice than Arvind Kejriwal in this present political situation. Not only party members but other members are also promoting the party on social networks and I don’t think they are getting any direct benefits out of that. It’s the urge to raise issues which common man is facing but couldn’t raise before and when raised generally suppressed by the men in power.

Tell me honestly, do you really think personalities like Meera Sanyal, Kailash Kher or Rabbi Shergill extended their support out of any greed?? In fact, they are actually sacrificing many things and are exposed to various risks by extending their support to the party. People who are criticizing AAP or Arvind Kejriwal have their selfish reasons for that. They all are related to opposite parties or getting direct benefits out of it for sure. Last day, one of my friend who is related to other party posted on his Facebook profile a picture which accused Arvind Kejriwal of something which would be the last thing he would ever want to do. It definitely showed that person’s selfishness and consequently lost my respect for him.

Many of my family members are from other political party and some of them have held good positions on the party and if that party wins next election, those members will be at profitable positions still I want AAP to win because I don’t want any persons to get benefitted at the cost of others, even if the benefitting persons are from my family. I hope this time people will make the right choice, a choice for which they won’t have to regret in the future.  The choice which will be a step Towards A Better Tomorrow.
Posted by Unknown at 10:59 PM